St Jude the apostle of Jesus ☦ and PID:

This song's reference to St Jude has long been suggested. Here, I will show for the first time that it is definitely a most important Beatles-era PID clue! (SEE PART 3 FOR "BAND ON THE RUN" AND EGYPT STATION ALBUM) 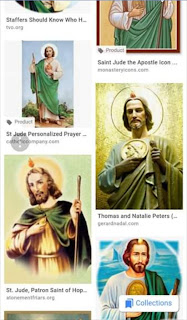 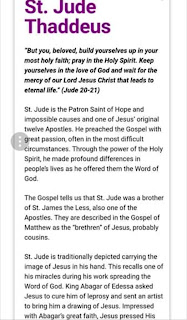 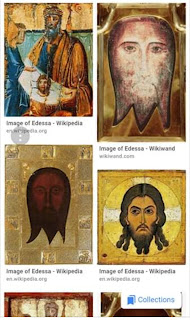 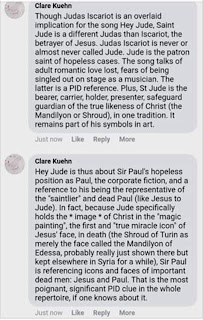 Judas Iscariot, never called "Jude", was the betrayer of Jesus in a conspiracy. He killed himself in shame, which does not suit Sir Paul: he is proud of his role as Paul the corporate fiction. His being a betrayer, a fraud to a higher purpose is an overlay meaning here, but ths song is about hopeless cases and I've discovered that its title is about Sir Paul "carrying" the Image of Paul as his own body now, bearing the "weight".

St Jude the apostle of Jesus carries Jesus's face in front of him. He carries the legendary first icon in his icons. This is like Sir Paul, who is the bearer of Paul's image after Paul's death. Using St Jude for a song is the ultimate PID clue in Sir Paul's general imagery during the Beatles years, and more famous than his "Band on the Run" song from his Wings band era (see appendix below, part 3.).

In titling the song for St Jude (and hopeless cases), Bill (a.k.a. Sir Paul) is representing himself as praying to St Jude, who is carrying another identity and face in front of him, literally and metaphorically, like Bill (the corporate fiction of being dead Paul McCartney). Why? St Jude portrays the holier, more revered man who died, in a medallion in front of him. For Jude, it was Jesus, in the death or miracle image. For Bill, it is Paul dead. Jude carries the face of Jesus, in Jude's own iconography. Bill is the "carrier" of Paul's image in public as himself with his false persona and body. Very clever, Bill. But RIP Paul! 😍😍😍 😢

1. Nobody serious thinks the song has to do with John Lennon's son, Jules (Julian Lennon) as a child, though that is what Sir Paul McCartney said about it. Julian was suffering at the time, 🆘️ and that may have played a role in the otherwise adult song about alleviating suffering. But the title must come from St Jude, the patron saint of hopeless cases. ⚠️

(One segment even mentions being alone, singled put, on stage, which Sir Paul must have often felt, as the representative of the corporate fiction that Paul was alive after late 1966. 💀🤕 That stanza is therefore a PID part.) However, it turns out that St Jude the apostle, himself, is used as a PID reference! (SEE PART 3 FOR "BAND ON THE RUN")

2. St Jude and his iconography: He almost always is shown bearing a medallion of the supposedly miraculous "True Likeness of Jesus Christ" (considered in eastern Christianity to be the first "icon"), because he supposedly showed a legendary miraculous "painting" of "sweat", a strange image of Christ's face to the new church in Odessa. 🛐 This image is called the Image of Edessa. Modern scholars sometimes say this was possibly actually the Shroud of Turin. (SEE PART 3 FOR "BAND ON THE RUN") https://www.google.com/amp/s/shroudstory.com/2014/12/03/the-shroud-of-turin-is-not-the-image-of-edessa/amp

3. "Band on the Run" song from Sir Paul's Wings band era: I could say BOTR is his most complete PID song. Similar to the Jude reference, it used a death and resurrection theme. Jude also shows an image-bearer idea, however. Anyway, the central religious ancient Egyptian idea was the replacement of the Sun king Osiris, murdered by conspiracy. His quasi or fake resurrection was in an unnatural, almost Frankenstein type of birth of Horus.

Isis, the mother, uses technology magic of some kind, to copulate with Osiris' corpse or at least to recreate Osiris as a clone of some kind:  her son Horus. This creates the replacement / resurrection of Osiris on Earth. (His spirit is supposed to be in the constellation of stars bearing his name.)

Sir Paul's reference to "falling from the Sun", in BOTR, is a theme which he picks up in a large number of other Egyptian themes through his life, including his recent "Egypt Station" album.
Posted by Clare Kuehn at 20:32 No comments: